2 June 2019
During a benefit concert for the seriously ill pianist Martyn van den Hoek, organized by the Franz Liszt Circle in collaboration with Stichting De Engelenbak, I am playing three later works by Franz Liszt: Wiegenlied (1881), 17th Hungarian Rhapsody (1884) and La Lugubre Gondola II (1885). Other performers in this all-Liszt concert are: Christo Lelie, René Poppen, Martin Oei and Klára Würtz.
Gasthuiskapel, Zaltbommel; 4 p.m. After the concert, a documentary about Martyn will be shown.
Admission: € 20.

June 2019
Soon after the appearance of Mazeppa in de romantische kunst (2014) I translated that book into English. Along the way, I decided to seriously curtail Liszt’s Mazeppa music section and work it out in a separate monograph.  Mazeppa in the Romantic Arts – an interdisciplinary cultural-historic study (AB III-03) paints, as it were, the background against which Liszt’s Mazeppa music can be better placed and understood and provides an overview of around 160 works of art (poems, dramas , novels, paintings, drawings, lithographs, operas, keyboard pieces, orchestral works, even (silent) films, all related to the Mazeppa subject), while The Mazeppa Music of Franz Liszt – Genesis, Analysis and Reception (AB III-06) sheds light on the complicated genesis of this work, in which ten different steps of development (versions) can be distinguished, created over a period of almost forty years.  The last-mentioned book has three parts. Part I considers the well-known Mazeppa study, Part II the symphonic poem, while in Part III the reception of this controversial work is discussed.

To conclude this project I have incorporated newly acquired insights into the Dutch version, of which a ‘Second revised edition’ has now been published (AB-III-02). For more information, see WRITINGS> Books/ Brochures.

May 8, 2019
Lunch concert in the Oude Kerk of Zoetermeer. On the programme:
– From the Sonata in e, Hob. XVI: 47 by J. Haydn: Adagio.
– Three later works by Franz Liszt: Wiegenlied, 17th Hungarian Rhapsody, La Lugubre Gondola II (1885).
– From Six Views on the Fuji by Bernhard van den Sigtenhorst Meyer: The Arise of the Fuji, The Fuji in the Rain.
– From Flowers and Birds – in memory of Bernhard van den Sigtenhorst Meyer, by Albert Brussee.
At 12: 45. Admission: a voluntary contribution.

12 April 2019 Short performance during a presentation by members of the Haagse Kunstkring, entitled ‘Portrait on the Stage’. Two parts from the cycle Six Views of the Fuji by Bernhard van den Sigtenhorst Meyer were performed: The Arise of the Fuji and The Fuji in the Rain.
Albert Vogel Hall, Denneweg 64, The Hague; 8:00 pm; admission: voluntary contribution.

10 April 2019
Short performance during a funeral service in the Grote Kerk in Epe: La lugubre gondola (version 2, 1885) and Wiegenlied, both by FranzLiszt.

25 October, 2018
As part of the festival ‘CHOPIN AAN ZEE’, in which the Franz Liszt Kring participated, I gave a lecture with PowerPoint presentation entitled Ary Scheffer and his paintings of Chopin and Liszt. The direct reason for integrating this lecture into the Chopin festival was the fact that Scheffer was on holiday in Scheveningen in the summer of 1854 and was then visited by Franz Liszt. Because Ary Scheffer made several portraits of Frédéric Chopin and Franz Liszt, and this Chopin festival formed part of the festivities around  ‘Scheveningen 200 years a seaside resort’, there was more than one reason to integrate a lecture on the painter’s relations with these two celebrities of Romantic keyboard music.
The festival took place in Museum Panorama Mesdag, Zeestraat 65, The Hague. Starting at 6 pm.

9 – 14 October 2018
Then, under the auspices of the (Dutch) Franz Liszt Kring, Theodore presented in the Netherlands on four occasions a programme with works by Hadjidakis, Liszt, Mitropoulos and (after the break) my Eleven Studies, as follows:
– on 10 October in the Oude Kerk in Zoetermeer (shortened programme, without Liszt and Mitropoulos)
– on 12 October in the Pro Rege concert hall in Rotterdam-Kralingen
– the next day in the Arnold Schönberg Hall, The Hague
– and finally, on Sunday afternoon, 14 October, in the Amsterdam Pianola Museum.

For comments and a fragment of an audio recording, see SHEET MUSIC> Compositions. 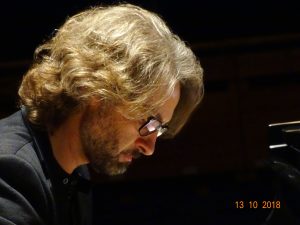 12 – 30 September 2018
Study trip to Brescia, Verona, Padua and Venice in connection with an article to be published in the Journal of the Franz Liszt Circle: ‘Franz Liszt in Venice in the spring of 1838’. Then to Brindisi and from there by boat to Athens to meet the Greek pianist Theodore Tzovanakis, who performed the world première of my Eleven Studies on a Theme by J. Mulders on 7 October in Geneva.

September 2018
‘The Art Piano’ or the piano as a work of art. An article about special keyboard instruments on which you not only can play beautiful music, but which are above all a feast for the eyes. From an ancient pyramid grand piano by Friederici from 1745, via romantic showpieces such as the Bösendorfer from 1867, which was specially built for the World Exhibition in Paris, to the so-called ‘Rhapsody’ from 1998, a blue Steinway of which only 24 have been built, because Gershwin was 24 years old when he composed his Rhapsody in Blue ….
In: Piano Bulletin 2018-2, pp. 72-82. 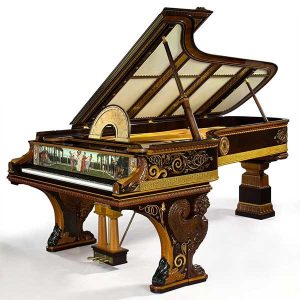