This richly illustrated booklet (full color) describes the journey that Franz Liszt and Marie d’Agoult made through Switzerland in the summer of 1835. In the summer of 2013 I followed in their footsteps on the basis of Liszt’s Agenda 1835 and the recently published diary excerpt Le voyage en Suisse by Marie d’Agoult. It wasn’t until seven years later that I got around to writing this travel report on the basis of a pad with notes, old diaries and piles of holiday photos. The travelogue fills a gap in the biography of both the famous pianist-composer and the gifted writer (because there is virtually nothing to be found in biographies about this episode of their lives), but on the other hand tells of my own experiences and discoveries during this adventurous hike. The result falls thus somewhere between a musicological study and a ‘holiday diary’. With a generous English summary.
For more information, see WRITINGS > Books an Brochures > AB III-07.

January 2021
As a musical counterpart to the Mazeppa project, in recent years I have composed a cycle of keyboard pieces entitled The Little Mermaid, in which Andersen’s essentially tragic fairy tale is musically illustrated. After several revisions, this approximately thirty-minute, seven-part work has finally appeared in print. For more information, see AB II-26. 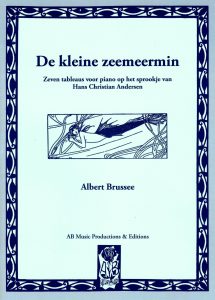 December 2020
Two articles appeared in the Journal of the Franz Liszt Kring:
– Franz Liszt in Bad Eilsen
– An unknown letter from Liszt to Saint-Saëns.

4 December, 2020
On this day, my eighth CD, with piano music by Bernhard van den Sigtenhorst Meyer was officially released. A choice was made from his early
keyboard pieces from the years 1915-1923, the time in which Van den Sigtenhorst Meyer wrote in a modal-impressionist style. His music is a rare example of Dutch Impressionism in music from the time of the Masters of the Hague School of Painters and writers and poets such as Couperus, Jacques Perk and Herman Gorter.
The CD was produced by the English label Toccata Classics. For more information, see: CDs > AB I-08. 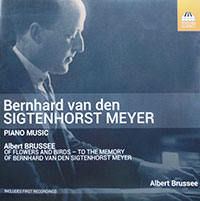 22 November, 2020
During the annual presentation of music by composers from The Hague, I participated with three personal compositions from the 1980s and 1990s, namely:
– Improvisation on Peruvian folk melodies
– Romanian folk tune
– Armenia
The first two are co-productions with the late Max Prick van Wely, who was also a member of the Hague Art Society [Haagse Kunstkring] in the past and was a great connoisseur of folk music. Armenia is the arrangement of a Suite of popular songs on an LP with Armenian folk music for shévi (a high flute) and piano.

November 2020
In the autumn of 2019, pianist and piano pedagogue Janine van Mever-Dispa died at the age of ninety. The funeral card I received contained a beautiful poem by the early Romantic poet and playwright Siegfried August Mahlmann: Herbstlied. Inspired by the comforting words of this poem, in which the farewell to life is so beautifully sung, this song was created in the winter of 2019-20. In grateful memory, the composition is dedicated to Janine van Mever.
For more information see: SHEET MUSIC> Compositions> AB II-25.

4 October, 2020
On 4 October, a performance entitled ‘Een boel beesten’ [‘Lots of animals’] took place in the Albert Vogel Hall of the Hague Art Society [Haagse Kunstkring], in which artists from various disciplines collaborated. My contribution consisted of six parts from the Eight Preludes, Opus 17, by Bernhard van den Sigtenhorst Meyer, all of which are inspired by an animal, namely:
– The Camel
– Wild Horses
– The Cat
– The Mouse
– The Marabou
– The Colibri