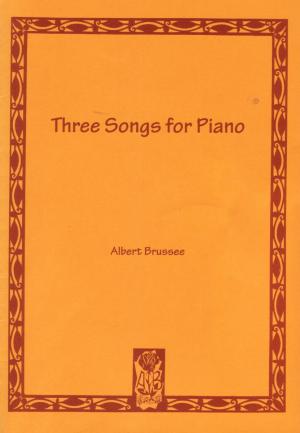 The Three Songs for Piano originated in the winter of 1982-83 as songs for baritone and piano. Some years later I rewrote them for solo piano and I revised the composition in 1993, whereupon the cycle was recorded and released (AB I-01). Only in the spring of 2006 did I proceed to prepare the composition for print, having made a few corrections. The work is written in the Romantic style, with some detectable influence from the ‘light muse’ (Cole Porter, Edith Piaf). With regard to their form, however, these compositions have an almost symmetric, classical structure. Because elements from the first song return in the third one, these ‘songs without words’ should preferably be played as one entity. The playing time is about 20 minutes.

Level of difficulty: Grade VIII-IX (on a scale of XII grades).

– My Song
– Between Dream and Despair
– A Song of Farewell 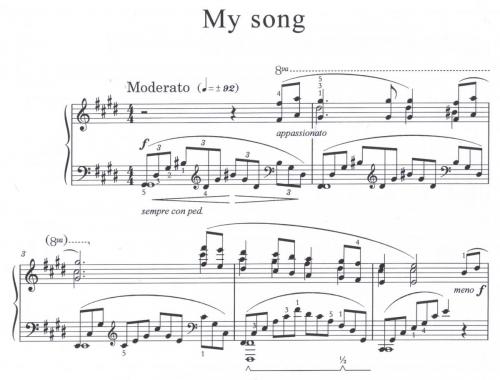 REVIEWS
“My song in C-sharp minor, vaguely reminiscent of Chopin’s nocturnes in the same key, is a wistful song with a beautiful low leading-tone in the melody. With the surprising opening on the dominant you find yourself suddenly in bygone days. The peaceful quavers movement and the driving triplets fling you to and fro between mellow pain and passionate melancholy. An unexpected moment comes in the form of the passage come una marcia funebre, which casts a deep shadow. This marcia funebre surfaces again at the end of Between Dream and Despair and in bar 41 of A Song of Farewell. There are more unifying elements in this trilogy. Each song is written in ternary form (A-B-A). The leitmotiv of bar 10 of the first song returns in bar 33 of the last. Viewed broadly, the whole trilogy possesses A-B-A symmetry. The keys are closely related, too. The second song is written in B-flat minor, the parallel to the D-flat-major middle section of the first song. The third part is totally in D-flat major and is therefore not only the major variant of the first song (C-sharp minor), but furthermore the parallel of the second. Brussee’s re-creations are written by a pianist who knows and loves his instrument. He combines the worlds of 19th-century Romanticism and the songs of one century later. The melodies are embellished in several ways and, through this rhythmical and contrapuntal variation, shown continually in a different light.
Maarten Boonstra, PianoWereld 2007 May. (Translated from the Dutch)

“The Three Songs for Piano were originally written for baritone and piano in the early 1980s. Together they make a well-rounded cycle with elements from the first song appearing in the last. They are written in the romantic style of the 19th century, tinged with influences from popular music of the 1940s and 50s. This is a substantial work taking all of twenty minutes if presented as a whole. My Song, with which the cycle begins, has rolling arpeggios and sumptious bass chords supporting a sweeping melody in the upper octaves of the keyboard, which sometimes needs three staves to accommodate it. A big and warm romantic sound is needed to bring out its expressive qualities to the full. For the quieter middel piece, Between Dream and Despair, Albert Brussee uses a very slow tempo with sighing chords and falling phrases. The third movement, A Song of Farewell, starts off with an almost jaunty melody, building to an enormous ending with big chords and arpeggios over the entire keyboard before the weighty final chords. This is a challenging piece to play but if you enjoy those big romantic sounds you certainly won’t be disappointed by the Three Songs.”
Angela Fogg, Piano Journal 2007-2.

COPYRIGHT, AVAILABILITY AND PRICE
© 2006 AB Music Productions & Editions, The Hague.
32 pages, with a preface in Dutch and English.
Available through the usual music channels or direct from the publisher.
Price: € 16.50.

Be the first to review “AB II-13” Cancel reply

The Three Songs for Piano originated in the winter of 1982-83 as songs for baritone and piano. Some years later I rewrote them for solo piano and I revised the composition in 1993, whereupon the cycle was recorded and released (AB I-01). Only in the spring of 2006 did I proceed to prepare the composition for print. The work is written in the Romantic style, with some detectable influence from the ‘light muse’.