7-15 June 2022
Finally, once again, holiday! By train of course (Interrail) and to Italy! I spent the first day in Freiburg am Breisgau, an old, really German city. The next day through the always beautiful Swiss country to Como, where I was warmly greeted by the owner of Park Hotel meublé, who immediately recognized me from previous visits. On 9 June, the Rapido took me to Colico at the very northern end of the lake; Franz Liszt and Marie d’Agoult had spent the night there on their first exploration of the lake, but I had never been there myself. Then to Lucca, the main destination of my trip. There I did research on the Villa Massimiliano, where the couple spent quite some time. I was very lucky to get in touch with Emilio Cerri, a still scratchy octogenarian who had previously written the foreword to a booklet on the Villa Massimiliano written by the great Italian Liszt scholar Luciano Chiappari: La cinquecentesca villa abitita da Liszt a Monte S. Quirico di Lucca. He brought me a clean copy, which I was allowed to keep! In Lucca, by the way, I enjoyed the music of Puccini, who was born there and who is commemorated every summer with a festival. I also visited Pisa and Siena, where I had not been for at least thirty years. In Pisa I saw the Campo Santo with Buffalmacco’s giant fresco Il trionfo della morte from 1336, which inspired Liszt to write his Totentanz for piano and orchestra. Two photos only. 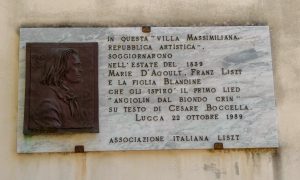 Liszt plaque on the wall of Villa Massimiliano. 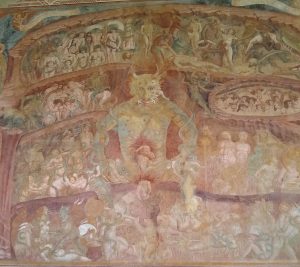 February 2022
In February 2022, the revised reissue of Armenia, published by XYZ in 1996, but no longer available, saw the light of day.
For more information, see under SHEET MUSIC > Coproductions/ Arrangements > AB II-08. 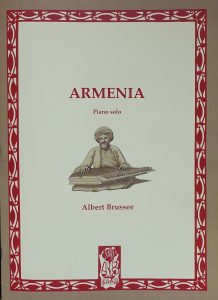 December 2021
In the Tijdschrift van de Franz Liszt Kring (‘Journal of the Franz Liszt Circle’) appeared:
– Franz Liszt – Herinneringen en beschouwingen van Moritz Rosenthal (‘Franz Liszt – Memories and reflections by Moritz Rosenthal’), the translation of a beautifully written article by the great pianist Moritz Rosenthal that was published in 1911 in the journal Die Musik. In an often humorous way, Rosenthal recounts his contact with his teacher and friend Franz Liszt. I have translated, extensively annotated and illustrated these Memoires.
– Nieuw licht op een oude foto (‘New light on an old photograph’). Central to this short contribution is the photo of Liszt surrounded by eleven of his pupils, a photo usually dated 22 October 1884, Liszt’s birthday. In reality the picture was taken on 5 July 1884, the day before the last master class of that year. 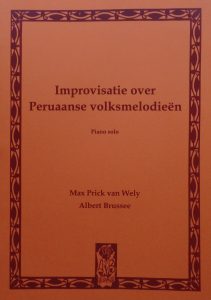 21 October 2021
At the International Liszt Conference in Budapest, organised by the Liszt Ferenc Academy of Music and the Liszt Ferenc National Museum and Research Centre, I spoke on the Mazeppa music of Franz Liszt, in particular on the Mazeppa etude of which an unknown intermediate version, reconstructed by me, was performed by the pianist Gábor Farkas. The conference, which was attended by a wide range of Liszt experts, was held in the small concert hall of the Liszt Ferenc Memorial Museum, where the composer himself used to give his master classes.
After my days in Budapest, I went by train to Vienna, where I met the pianist Martyn van den Hoek and his wife. On the way back to the Netherlands, I spent a day in Regensburg.
A little holiday between two lock-downs…. 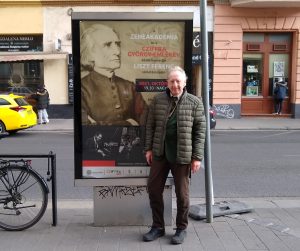 10 October, 2021
At the Members-for-Members concert of the Franz Liszt Circle in the Westvest90 Church in Schiedam, I will be performing the Fifth Hungarian Rhapsody by Franz Liszt.
The concert starts at 14:00. Entrance: free (voluntary contribution).
Later in the day there will be a short recital by Nikola Meeuwsen with a.o. the Sonata in B minor by Liszt, followed by a social gathering. Ends around 18:00 hours.

Entrance on the basis of a voluntary contribution.

4 September, 2021
In September 2021, the AVN (General Association of Nature Protection) will have existed for 95 years. This is celebrated with an anniversary exhibition ‘Ode to Nature in The Hague and Surroundings’.
The exhibition is being held at the Kunstkring in The Hague. In the context of this, on Saturday afternoon 4 September, during the “vernissage for the artists and other persons involved” I am playing from 3:00 p.m. to 3:30 p.m. some keyboard pieces from The Hague composer Bernhard van den Sigtenhorst Meyer that in one way or another are all related to nature, namely:
– Two parts from Of the Flowers, Opus 1: Roses and Cornfield in the Sun.
– Two parts from Of the Birds, Opus 4: The Swan and A Flock of Tits in the Woods.
– And my own Of Flowers and Birds – To the Memory of Bernhard van den Sigtenhorst Meyer.