6 February 2023
Book presentation of In the footsteps of Franz Liszt – Twelve wanderings through Europe for the Rotary Club Heemskerk-Uitgeest. This is a private performance.

22 January 2023
Participation in a benefit concert in the Albert Vogel Hall of the Haagse Kunstkring in aid of ‘rollers’ under the grand piano. Performed will be three pieces by Franz Liszt:
– M.K., a by me completed sketch that would become part of the cycle Harmonies poétiques et religieuses in first draft (1845);
– Postlude, the final piece of the same cycle in the 1847 version, based on the theme that would later be included in the splendid Bénédiction de Dieu dans la solitude;
– and Göttliche Gedanken, my keyboard transcription of an unknown song by Liszt.

22 October 2022
On 22 October, Liszt’s birthday, the Franz Liszt Kring’s donor day took place, as always in the Westvest90 church in Schiedam. The day was marked by the death of Martyn van den Hoek, who had been our chairman since 2017. During the memorial concert, I played my keyboard transcription of Liszt’s song Göttliche Gedanken (AB II-23).

9 October 2022
CD and book presentation in the music salon of Huis Midwoud, Midwouder Dorpsstraat 17, starting at 15:00.
Before the interval, my latest CD with keyboard music by Hague composer Bernhard van den Sigtenhorst Meyer will take centre stage (AB I-08), already released in 2021 but never presented due to the corona pandemic. The presentation will be cast in the form of a lecture-recital. I will tell a little about Van den Sigtenhorst Meyer, the Hague composer who wrote dozens of piano pieces in an impressionist style between 1916 and 1923, and play several of them.  This almost forgotten music about flowers, birds, old castles and distant lands could be seen as the musical equivalent of the paintings of the masters of the Hague School of Painting and the stories and novels of Couperus.
After the break, In het voetspoor van Franz Liszt – Twaalf zwerftochten door Europa [‘In the footsteps of Franz Liszt – Twelve wanderings through Europe’] will be presented. By means of a large number of images projected on the screen, something is told about each of these twelve excursions. We follow Franz Liszt to Ukraine, Poland, France, Germany, Hungary, Italy and even to Constantinople (Istanbul), from where he crossed the Bosphorus a couple of times and traveled around in Asia Minor. This book presentation will also be illustrated with some music excerpts. 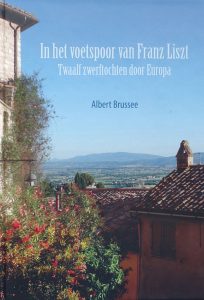 In the past, during holidays, I have often visited the places where Franz Liszt lived and worked. It is precisely by doing research on location that a publication becomes more personal and details come to light that have previously been overlooked. By moving around in his ambiance, you get a little closer to him. I have published about several of these excursions in the past in the form of magazine articles. In this book, I have brought together the most interesting of these travel reports, where necessary reworked, expanded or shortened. In addition, some previously unpublished or only in English published articles have been included. The approach is not always the same. Sometimes we follow Franz Liszt in his wanderings through Europe and my role is merely that of an invisible companion taking pictures over his shoulder. At other times, the result is more like a holiday diary of a music tourist, recounting his adventures, the discoveries he made, the cities he visited.  But always Franz Liszt is at the centre, and each chapter highlights episodes from his life that are not generally known.
For more information, see WRITINGS > Books and  brochures > AB III-09.