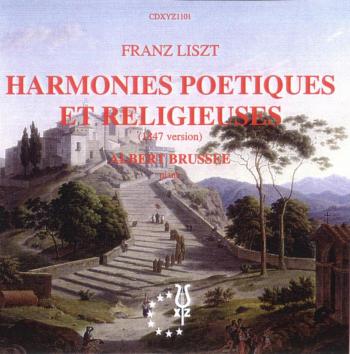 This early version of the well-known cycle Harmonies poétiques et religieuses by Franz Liszt was composed in the autumn of 1847, six years before the definitive version saw the light of day, published by Kistner in Leipzig. In addition to widely divergent versions of pieces also present in the definitive version, this earlier cycle includes four completely unknown compositions: the most beautiful Hymne de la nuit, Hymne du matin, with its early-impressionist introduction, Litanies de Marie, a work leaning towards the religious, just under 15 minutes in duration, and a colossal, virtuoso composition in E-flat major. In his review, the great French Liszt expert Serge Gut wrote, “The 1847 cycle Harmonies poétiques et religieuses is of great musical worth, must be regarded as an independent entity and may certainly not be dismissed as a ‘sketch’ for the definitive version. It reveals a previously unknown facet of Franz Liszt’s genius.”

REVIEWS
“It is strange to hear this famous cycle without its even more famous Funérailles, but this is what happens in the 1847-version, reconstructed, edited and world-premièred by Brussee in its entirety (….). You will have, as I did, the impression that you are listening to the cycle for the first time, such is Brussee’s unique power to convey both poetic and religious – mystic I would rather call them – feelings to the full. Shape, phrasing, tone-quality and variety are all called into play, but with an understanding that only a composer – and Brussee is a composer – can have.”
Alberto Portugheis, London, Piano Journal 1999-2.

“Brussee premièred his discovery last autumn, provided an extensive sheet-music publication and has now produced a creditable CD recording. Despite having had to bid the podium farewell long ago due to a muscular affliction, Brussee is capable of spotlighting this demanding music with gusto. The Bösendorfer has a warm and full sound, strength and poetry are in balance, there is no sanctimoniousness in the reflective sections. Liszt is here taken seriously in a good way.”
Thiemo Wind, De Telegraaf, 4 September 1998. (Translated from the Dutch)

“Albert Brussee deserves respect and admiration not only as researcher but also as player. He has a feeling for the grandeur of this music, creates space in even the most massive of chord passages, and lets the Bösendorfer amply resonate without its becoming a mud bath.”
Aad van der Ven, Luister, September 1998 (Performance – 8; Recording – 8). (Translated from the Dutch)

COLOPHON/ PRACTICAL INFORMATION
© 1998 by Muziekuitgeverij XYZ (CDXYZ1101).
This CD is no longer available on the regular market; the last copies are only available through AB Music Productions & Editions.
The individual tracks can be downloaded on iTunes.

Be the first to review “AB I-03” Cancel reply

In his review, the great French Liszt expert Serge Gut wrote, “The 1847 cycle Harmonies poétiques et religieuses is of great musical worth, must be regarded as an independent entity and may certainly not be dismissed as a ‘sketch’ for the definitive version. It reveals a previously unknown facet of Franz Liszt’s genius.”