reconstructed, edited and fingered by 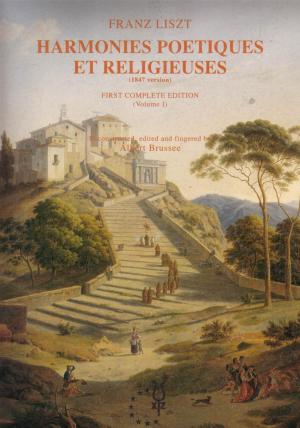 The genesis of Franz Liszt’s Harmonies poétiques et religieuses cycle is long and complicated. Three phases may be discerned. In the first, running from 1833 to 1846, there is still no question of a complete whole. The nine, for the greater part not previously issued, keyboard pieces from this first period are all assembled in Franz Liszt. Harmonies poétiques et religieuses – Early versions (AB II-11; see there for more information). The second phase comprises the first ‘complete’ cycle Harmonies poétiques et religieuses, written down in Sketchbook N9, kept in the Goethe- and Schiller-Archiv in Weimar (GSA 60/N9). These piano pieces were created in the autumn of 1847 when Franz Liszt was a guest in Carolyne von Sayn-Wittgenstein’s wooden country house near the village of Woronince (Woronowce) in the Ukraine. The cycle comprises twelve compositions, one of which (probably the first version of the well-known Bénédiction de Dieu dans la solitude) was torn from the sketchbook. The remaining eleven, largely inspired by poems from Lamartine’s poetry collection Harmonies poétiques et religieuses, are published here for the first time in two volumes by the Music Publishing House XYZ. Volume I comprises the first six parts.
With a preface by Peter Scholcz, chairman of the Franz Liszt Kring, an illustrated ‘Introduction’ and detailed ‘Critical notes and suggestions for performance’.
The language is English. 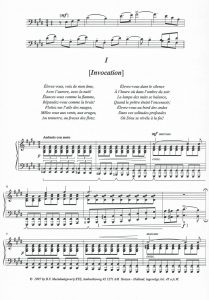 REVIEWS
“(…) The cycle, considered in its entirety, is more homogeneous that that of 1853. It displays great musical qualities and unique originality, and is not in the slightest to be considered as a draft for the definitive version, but rather as a rounded collection presenting a hitherto unknown facet of Franz Liszt’s genius.
Albert Brussee has created a remarkable work of reconstruction, demanding a lot of patience combined with ingenuity and ‘savoir faire’. (…) The editing process was equally most tricky, for Liszt’s autograph version is a ‘crude product’ with very few indications regarding performance. The editor has been faced with the difficult task of providing us with a publication having the rigor of an Urtext but with those elements necessary for practical use. Due to his considerable knowledge of Liszt’s pianistic style he has succeeded in this challenge.”
Prof. Serge Gut, Paris, Revue de Musicologie, 8511 (1999). (Translated from the French)

“A discussion of each of the eleven parts separately would take up too much room in the context of this review. I will therefore leave it at the observation that Brussee’s own performance on 26 October 1997 and my own playing of this new edition can lead to no conclusion other than that it concerns here beautiful compositions, worthy of Liszt. (…) The way XYZ has published it is exemplary. The eleven parts are divided over two volumes embellished with an attractive full-colour print. The format is generous and the notation brilliantly executed and therefore easily readable. (…) Brussee’s notes are extremely detailed, with a justification for all decisions taken and with valuable suggestions for interpretation.”
Christo Lelie, Piano Bulletin 1998-1. (Translated from the Dutch)

Be the first to review “AB II-09” Cancel reply

This edition comprises the first six parts of the early version of the the cycle Harmonies poétiques et religieuses by Franz Liszt, published for the first time in 1997 by the Dutch Publishing House XYZ. These piano pieces, written down in Sketchbook N9 kept in the Goethe- und Schiller-Archiv at Weimar (GSA 60/N9), were created in late 1847, when Franz Liszt was a guest in the wooden country house of Carolyne von Sayn-Wittgenstein near the village Woronince (Woronowce) in the Ukraine.