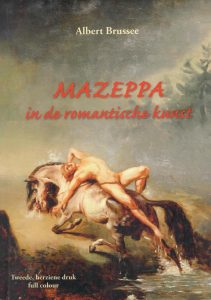 Central to this book is the story of Mazeppa, the young Cossack who, as a page at the court of the Polish King Jan II Kazimierz, had an affair with the young wife of an old, powerful nobleman. The lovers were caught red-handed and, out of anger, the cuckolded husband had the unfortunate lover tied naked to a wild horse, after which he was whipped into the wilderness to die a miserable death. The horse, however, was a strong and clever animal who ran back to his native land, Ukraine, at full gallop. There, the youth, at death’s door, was recognized, saved and later crowned as hetman (leader) of the Cossacks. This story inspired many romantic artists in the 19th century; more than one-hundred-and-fifty works of art (poems, dramas, paintings, drawings, operas, symphonic works and keyboard pieces) bear witness to this. After two introductory chapters on the historical Mazeppa and Romanticism as a style, Chapter III deals with around forty literary products. In Chapter IV the hippodrama genre – a form of spectacle, no longer in  existence, in which the horse plays the leading role – is discussed in depth, because it was particularly in circuses and second-rate theaters that the Mazeppa story was performed worldwide in the 19th century over a period of more than sixty years. This type of performance evolved into the medium of the (silent) film at the beginning of the 20th century, which is discussed in detail in Chapter V. Chapter VI presents  dozens of Mazeppa paintings and drawings, including an almost completely unknown painting by Delacroix that the author found in Cairo. The last three chapters, totalling more than 100 pages, are reserved for the musical arts. Chapter VII deals with twenty (!) Mazeppa operas. Chapter VIII provides information about an even greater number of keyboard pieces. Finally, in Chapter IX, songs, choral works, cantatas and orchestral works are central.

The book, which is richly endowed with 173 illustrations, is published in full colour (312 pages) for the reader interested in cultural history, literature, visual arts and music. With a Pro- and Epilogue, Bibliography, Index of Persons and Account of Images and music examples.

REVIEWS
“Albert Brussee worked for five years on an interdisciplinary cultural-historical study entitled Mazeppa in the Romantic Arts. Without striving for completeness, with this book he has assembled a wealth of valuable information. After introductory chapters on the historical Mazeppa and Romantic art as a style, the focus is on various disciplines: literature, circus and theater, film, the visual arts and music. This wide perspective reveals connections that would otherwise remain hidden. For example: Liszt was inspired by the poem Mazeppa by Victor Hugo, who in turn saw the painting of Boulanger developing, a work that arose in response to Byron’s poem, et cetera. Of course, the emphasis is on music – Albert Brussee is a musician – in which the creations of Liszt and Tchaikovsky are still the best known, but there is more, much more! Albert Brussee has discovered in all around sixty Mazeppa compositions!
The book reads agreeably, the explanatory notes are fortunately at the bottom of the relevant pages, there are many full-colour illustrations and music examples, and the concise analyses of the compositions are clear and well-understandable. Highly recommended!”
Maarten Boonstra in PianoWereld 2014-5.

“This is an extremely sparklingly written book, richly illustrated and pleasant in design. What the author has discovered is altogether amazing. Mazeppa in the literature in the broadest sense of the word, in the visual arts and music – forms of culture that still exist. However, there is also presented a cultural manifestation that in itself is already historical: the hippodrama. Brussee paints this past world in the fourth chapter. Fascinating how these performances on the border of art and spectacle, in which the horse plays the main role, are brought to life for us.
One asks: will not this become a motley bazaar, a gaudy display? The writer has managed to prevent this, perhaps even unconsciously. His medium is at the same time a great charm of the book: Brussee takes you on the path of the researcher. The reader is involved in the research, even if it concerns a dead-end path. (…) The presentation is therefore very personal: the writer is present on each page in his calm, somewhat lofty style. There is – in the best sense of the word – an old-fashioned wind blowing through these pages. In recent decades it has been virtually prohibited to make a personal voice heard in scientific works. In this study, however, which explicitly addresses the general reader, the balance between scientific approach and personal touch is just right.
The original spark that ignited this firework was undoubtedly Liszt’s Mazeppa music. Albert Brussee will return to this spark and will investigate the entire development of Liszt’s Mazeppa music in detail. We are looking forward to it!
Klaas Trapman in Piano Bulletin of EPTA – The Netherlands and Flanders, 2015-1.

This exhaustively documented and richly illustrated book on the Mazeppa theme is primarily a ‘mer à boire’ for the enthusiast of the nineteenth century, the century of the extremes. Author Albert Brussee, musician, composer and historian, has done very thorough research into all possible expressions of art and, in addition to literature, the visual arts and music (which gets the most attention), he certainly did not ignore the more popular forms, for example the vaudeville. Even the early years of cinematography are discussed. Many musical examples have been included in the chapters on ‘Mazeppa in the musical arts’, so that you can play them yourself. This book has even more surprises in store, which remain unnamed here: you should discover them yourself!
Eric de Ree in the Newsletter of the Dutch Byron Society, May 2016.

Be the first to review “AB III-02” Cancel reply

After two introductory chapters on the historical Mazeppa and Romanticism as a style, Chapter III deals with some forty literary products. In Chapter IV the hippodrama genre is discussed in depth; this type of performance evolved into the medium of the (silent) film at the beginning of the 20th century, and is discussed in Chapter V. Chapter VI presents dozens of Mazeppa paintings and drawings. The last three chapters are reserved for the approximately sixty Mazeppa compositions that the author managed to track down. Please see III-03 for the English edition.