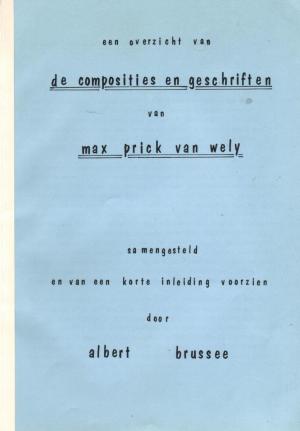 Max Prick van Wely (1909–2000) was born at Meester Cornelis (now Jatinegara, a suburb of Jakarta) on Java. During his grammar-school years in Nijmegen, The Netherlands, he received piano and organ tuition from Willem Kerper. In 1932, at the Amsterdam Conservatory, he completed his piano studies with Willem Andriessen. He also received organ lessons from Cornelis de Wolf and composition tuition from Sem Dresden. Three years later the young pianist played his own First Piano Concerto with the conservatory orchestra in the Amsterdam Bachzaal. Over the years more than a hundred compositions would see the light of day: orchestral works, chamber music, and large number of piano pieces, choral music, songs and a few melodramas for speaking voice and orchestra. Prick van Wely made his name primarily as an author. Eleven books by him were published, of which Het orgel en zijn meesters (‘The Organ and its Masters’) and De bloeitijd van het Nederlandse Volkslied (‘The Bloom of the Dutch Folksong’) went into several printings. There also appeared various translations, arrangements, song albums and fairy-tale collections, the latter written together with his wife Beatrice Prick van Wely. A large number of articles – more than 90 in total – complete this overview.
I came to know Max Prick van Wely when I was a schoolboy at the Apeldoorn grammar school, where he led the school orchestra and was the school music teacher. He helped me with my first tentative steps along the composition pathway. The bond remained strong throughout the conservatory years, too. This resulted in the 1980s in an amicable collaboration that gave rise to various coproductions (see under Sheet Music). When he celebrated his 80th birthday on 14 September 1989 I surprised him with a catalogue of his complete oeuvre, preceded by a short biographical sketch. It is a basic domestic publication of 32 pages.

Be the first to review “AB III-04” Cancel reply

Max Prick van Wely (1909–2000) studied for the main subjects Piano and Composition at the Amsterdam Conservatory and concluded his studies with the performance of his own First Piano Concerto with the conservatory orchestra in the Amsterdam Bachzaal. The present catalogue lists more than a hundred compositions. However, Prick van Wely made his name primarily as an author. Eleven books were published in addition to various translations, arrangements, song albums and fairy-tale collections. A large number of articles – more than 90 in total – complete this overview.