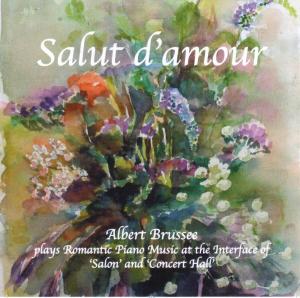 On this CD is to be heard music from great composers that, in a wide variety of arrangements, has withstood the test of time in the salon repertoire but was in fact originally written for piano. In addition, compositions from lesser-known Romantic composers are presented which are worthy of being saved from oblivian. One or two arrangements and compositions from my own pen are also included, being stylisitically in line with the repertoire offered here.
The recordings were made at the ‘Onder de Linden’ Studio in Valthermond, The Netherlands, on the beautiful Steinway-D instrument that belonged to the late pianist Rian de Waal. Balance engineer and editing was Daan van Aalst.

New CD from Albert Brussee
Back to the first half of the 20th century: that is the association you form when listening to Albert Brussee’s latest CD Salut d’amour. […] Brussee has had to choose from an unbelievably vast repertoire of salon pieces and piano transcriptions. Some works, such as Anton Rubinstein’s Romance in E flat and Francis Thomé’s Simple aveu, have become famous through various master violinists such as Mischa Elman, who made recordings of them at the beginning of the twentieth century. The last work on the CD, Maria from Leonard Bernstein’sWest Side Story, has been adapted for piano by Brussee himself. A very successful transcription that is interpreted with the right amount of passion. Jules Massenet’s Méditation de Thaïs is a most beautifully performed adaptation from the opera of the same name and is here to be heard for the first time as a piano arrangement on CD, which also applies to J. Ascher’s A Leonora and Fibich’s Poème. Better known works by Mendelssohn (Frühlingslied), Tchaikovsky (Waltz in A flat) and Grieg (An die Frühling) have also been included, as have two recent compositions by Brussee himself, the Valse chopinesque and Valse finale . These new pieces do not stand out (and I mean this in a positive way) from the well- known and lesser known repertoire. […] In my enthusiasm for the compositions presented I have almost forgotten to mention that Brussee’s playing of the works on this CD is extremely sophisticated and tasteful.
Kolja Meeuwsen in Piano Bulletin 2013-1. (Translated from the Dutch)

Romantic Piano Music at the Interface of ‘Salon’ and ‘Concert Hall’
A beautiful combination of short musical jewels from – mainly – the second half of the 19th century and the first half of the 20th century. Among such celebrities as Tchaikovsky, Elgar, Massenet, Mendelssohn, Sibelius and Grieg, you can listen to Anton Rubinstein, Cesar Cui, Zdenek Fibich, Cécile Chaminade and Leonard Bernstein, plus a number of lesser known but very talented composers like Joseph Ascher, Franz Behr, William Peterson-Berger, Francis Thomé and Billy Mayerl. Albert Brussee’s own music also appears on this nostalgic – and exciting at the same time – disc. Brussee’s intervention – apart from his exquisite, elegant and expressive playing – is also present in the arrangements he made of the pieces by Fibich, Massenet and Bernstein. This historic collection of miniatures will not only give the listener enormous pleasure and transport you to bygone times, it will also be an inspiration for pianists and teachers looking to get away from too hackneyed a repertoire.
Alberto Portugheis in Piano Journal 2013-1 (Issue 99).

How the pianist Albert Brussee would fare with Beethoven or Brahms I don’t know, but the Romantic repertoire on this CD, a tray of delicious cream chocolates, is certainly secure in his hands. He chooses for charming pieces, some from the salon repertoire, and along with these his own arrangements, such as ‘Maria’ from Bernstein’s West Side Story. There are also some of his own compositions: the pastiche-like ‘Valse chopinesque’ and the more tempestuous ‘Valse finale.’ In addition there are compositions of Tchaikovsky, Elgar and Sibelius that are easy on the ear alongside music from a handful of lesser mortals that is recorded here for the first time. Among these composers is Thomé, of whose well-known ‘Simple aveu’ there was until now only a recording on piano roll.
Rudolf Nammensma in the Leeuwarder Courant. (Translated from the Dutch)

AVAILABILITY AND PRICE
This CD is available only via AB Music Productions & Editions. Price: € 18.50.
The individual tracks can be downloaded on iTunes.

Be the first to review “AB I-6” Cancel reply

On this CD is to be heard music from great composers that, in a wide variety of arrangements, has withstood the test of time in the salon repertoire but was in fact originally written for piano. In addition, compositions from lesser-known Romantic composers are presented which are worthy of being saved from oblivian. One or two arrangements and compositions from my own pen are also included, being stylisitically in line with with the repertoire offered here.