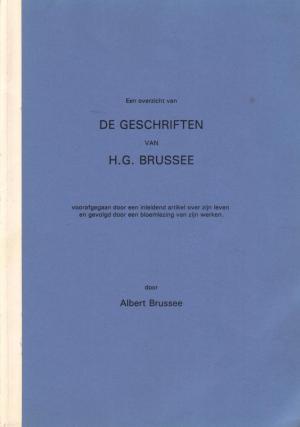 My father, Herman Gerrit Brussee (1903–1995), was an educator through and through. At the age of 18 he was already teaching. In the evenings he studied for his teaching certificate with physics as speciality and mathematics, commerce and English as subsidiaries. This enabled him to teach these subjects at junior high school level (then termed MULO, later ULO). Partly due to the ever increasing number of children – I come from a family of twelve children – he decided to supplement his income by writing school textbooks. It quickly became clear that his true talent lay in this field. In 1937 Moderne natuurkunde voor U.L.O. appeared, a series of four textbooks, good for 175 printings in total in print-runs of on average 2000 copies. From this first series alone about 350,000 copies were printed, therefore. Other successful titles were Pak An!, a series of exercise books for physics for the upper classes of elementary school (Part I: 84 printings!) and Met de Jaargetijden mee, a series of exercise books for botany and zoology (together with P. Bonk; Part I: 67 printings). In total about 3,600,000 of my father’s books were sold. This makes him one of the best-selling authors (of school books) in 20th-century Holland. On the occasion of his 88th birthday I created a catalogue of his complete works. The 170-page book opens with a reasonably extensive account of his life, illustrated with many photos. Then follows the catalogue itself, categorized as follows:
– Physics and chemistry (53 books)
– Biology (72 books)
– History (19)
– Languages (16)
– Readers (27)
– Miscellaneous (2)
– Articles (8).
After this there follow another ‘Twelve excerpts’: pieces from various publications.

COPYRIGHT and AVAILABILITY
© 1991 AB Music Productions & Editions, The Hague.
This was a small-scale publication. It is sold out and will not be reprinted. It may be inspected at the National Education Museum (Nationaal Onderwijsmuseum) in Dordrecht, where pretty well the complete works of my father are kept.

Be the first to review “AB III-05” Cancel reply

On the occasion of his 88th birthday, I wrote a catalogue of my father’s oeuvre. The 170-page book opens with a sketch of his life, illustrated with photos. This is followed by the catalogue, subdivided into the categories Physics and Chemistry (53 books), Biology (72 books), History (19), Languages (16), Reading booklets (27), Miscellaneous (2) and Articles (8). This is followed by ‘Twelve reading pieces’, parts from various editions.