THE MAZEPPA MUSIC OF FRANZ LISZT: 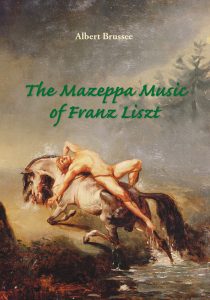 This book is written for musicians, Liszt experts and anyone interested in this fascinating composer. The monograph comprises three parts. Part I focuses on the keyboard music devoted to the Mazeppa subject: the early Mazeppa sketch from Sketchbook N6 and of course the well-known Mazeppa etude, of which a previously unknown version has been published in Appendix I. Part II describes the genesis of the Symphonic Poem Mazeppa, in separate chapters dealing with the first orchestral version from 1851 (published for the first time in piano score in Appendix III) and Raff’s dubious role in the creation of both this early version and the final one from 1854. In the last two chapters of Part II attention is paid to the arrangements of the symphonic poem: those by Liszt himself (for two pianos and for piano quatre mains) and those by others. Following the creative process over the years, one gains an idea of how masterworks come into being: not as a gift from heaven, but as the result of hard labour and much self-criticism. Part III discusses the history of performance and reception of Liszt’s Mazeppa music, which caused a great deal of controversy. The final chapter presents an overview of the many curiously contrasting opinions on this composition by leading composers, famous pianists and conductors, and musicologists.

Regarding the subtitle – by ‘analysis’ a ‘description of the music in all its aspects’ should be understood: it is not only about form analysis (structure and phrasing) and I certainly do not give a complete harmonic analysis of the music. All comments made, including attention to rhythm, dynamics, tempo relationships and pianistics, are always related to the interpretation. I have tried to describe what emotionally and musically (music theoretically) ‘happens’ in the music and how all these elements are interrelated and ideally result in a convincing interpretation. This did require a large number of music examples and two complete scores (Appendices I and III). I hope these will suffice to illustrate all of this. Nevertheless, it is good to have the scores of the several versions (especially that of the orchestral score of the 1854 version) close at hand.

REVIEWS
“Albert Brussee’s new book is exclusively about Franz Liszt’s Mazeppa music in all its versions. This is also a valuable book for readers who think negatively about these musical creations. It offers a wide view of the cultural panorama of the nineteenth century, in which Brussee has so often shown himself to be well at home. Numerous musicians, whose names we vaguely know, pass by, in mutual coherence. Everything is presented in direct quotes, always with the original language in a footnote, and with a wealth of well-chosen illustrations. Just as in Mazeppa in de romantische kunst, of which an English translation has appeared recently, the reader is somewhat involved in the research. The author shows how easily opinions and ‘facts’ are adopted without question. Brussee unmasks many of these idées reçues in a convincing way, without fear of authority. Where the author himself speculates, he lets his readers free. His arguments invite thinking along. (…) One reads this book with pleasure. Footnotes can be seen immediately on the page. The physical appearance is also very good. (…) This study deserves international attention.”
Klaas Trapman in Piano Bulletin from EPTA Netherlands and Flanders , 2019-3.

“(…) The Mazeppa Music of Franz Liszt offers a very meticulous reconstruction of the genesis of both the piano works and the Symphonic Poem Mazeppa and the arrangements of the orchestral version of Liszt himself and others. In addition to this genesis, which, according to Brussee, shows that creating a masterpiece is not a gift from heaven, but above all the result of hard work and a lot of self-criticism, the book offers an emotional and musical analysis of the several versions, without going into too many harmonic and technical details and surely valuable for performing musicians. In the third part, a beautiful and very complete account of the performance and reception history of the various Mazeppa compositions is presented.
Also interesting is the way in which Brussee disproves the myth that the composer Joachim Raff, who worked as an assistant to Liszt for some time in Weimar, would have played a major part in the creation of the symphonic poem Mazeppa . This myth was created by Peter Raabe (1872-1945), who was the first to compile a chronology of all known works by Liszt. (…) Brussee goes back to the core and concludes that Raabe was not aware of the first orchestral version from 1851, which is kept in Paris and deviates on various points from the final version. After examining the correspondence between Liszt and Raff and especially by comparing the handwriting of the manuscripts handed down, he convincingly proves that Liszt himself wrote these and that Raff therefore had no role in the composition and orchestration process. This historical correction alone, tastefully described as an exciting detective story, makes The Mazeppa Music of Franz Liszt a very valuable addition to the current Liszt literature.”
Paul Janssen in The New Muse 6-2019.

“This monograph, the product of more than ten years of research by the notable Dutch Liszt scholar Albert Brussee, issued in tandem with Mazeppa in the Romantic Arts: an Interdisciplinary Cultural-Historical Study, is an important publication. It adds significantly to the Liszt compositional narrative. (…)
Liszt’s Mazeppa Sketch, ‘un Mazeppa….au quadruple galop’ penned by him probably on 31st May 1832 in his sketchbook N6, is now widely acknowledged as “the composer’s first attempt at a musical setting of Hugo’s poem.” (Adrienne Kaczmarczyk in Franz Liszt, Vingt-Quatre Grandes Études und Andere Werke, Preface, p. xxvii.) It was published for the first time in 2011 in Franz Liszt – Three Sketches from Sketchbook N6, in a reconstructed and edited version by Brussee. (…)
Brussee reveals for the first time in Liszt literature that advertissements found in issues of the Revue et Gazette musicale de Paris of 1841 “indisputably prove [that] the Mazeppa étude was already for sale in the spring of 1841.” He adds: “In the issue of 2 May 1841, Maurice Schlesinger, who was the editor of the Revue et Gazette musicale, included a ‘Supplement …[with the following advertissement:] “25 GRANDES ÉTUDES BRILLANTES/ par/ F. Liszt./ Op. 25 – Divisées en quatre suites. – Chaque: 20 fr./ Les deux premières suites sont publiées./ MAZEPPA, étude: 7 fr. 50 c.” Evidently, already early in May 1841 the Mazeppa study was for sale seperately. “The reason why this had not been noticed earlier by others probably lies in the fact that supplements are mostly not preserved and included in the bound volumes of journals. Also on free internet sites, such as Internet Archive and Google Books, the supplement in question will be sought in vain. Fortunately, there are exceptions. The ‘Supplement/ à la Revue et Gazette Musicale de Paris/ No. 31. Du 2 mai 1841./ Musique nouvelle/ publiée par/ Maurice Schlesinger’ is to be found in the bound copy of the year 1841, held in the Dutch Music Institute (‘Nederlands Muziek Instituut’) in my place of residence, The Hague.”
Brussee’s contribution to the Liszt compositional narrative is no less significant when he directs his attention to the Transcendental Studies, and in particular, to number 4 (Mazeppa), written in 1851. Following a thorough survey of its genesis and an analysis on pages 85 to 99, he includes in Appendix I the first publication of a hitherto unknown version of the piece, dedicated to the young, gifted Dutch pianist Nikola Meeuwsen: a version deviating markedly from the standard one from measure 86 to the Allegro animato.
Noteworthy and also convincing is Brussee’s assertion that, in January 1851, Liszt arranged for orchestra “the musical material of his 1841 Mazeppa study”, a 33-page extended piano score with specified instrumentation, found in the Lichnowsky Sketchbook N2. This so-called ‘particella’ became the first version of the symphonic poem Mazeppa of 1851. The manuscript of this first version, now kept in the Bibliothèque nationale de France in Paris, is basically identical to the extended piano score. Brussee generously assists the reader by including in Appendix III his own ‘Transcription for Piano of the Symphonic Poem Mazeppa in first version (1851)’.
Suffice to say that this is an essential read, and a welcome gift for all interested in keeping in step with the latest Liszt research.”
William Wright in The Liszt Society Newsletter No. 137 – 2019 Q4.

Be the first to review “AB III-06” Cancel reply

This book is written for musicians, Liszt experts and anyone interested in this fascinating composer. The monograph comprises three parts. Part I focuses on the keyboard music devoted to the Mazeppa subject. Part II describes the genesis of the Symphonic Poem Mazeppa. Part III discusses the history of the performance and reception of Liszt’s Mazeppa music, which caused a great deal of controversy. The final chapter presents an overview of the many curiously contrasting opinions on this composition by leading composers, famous pianists and conductors, and musicologists.